Home › Blog › What is a Featured Snippet and How to Rank for It?

What is a Featured Snippet and How to Rank for It?

When it comes to search engines, it feels like you’re in a marathon race. I’m not only referring to the enormous competition going on the field but also about that incredible amount of preparation preceding it.

Hours and hours of research just to make sure your next move is going to be in the right direction, at the right time.

There has been, however, one specific SEO phenomenon that has been puzzling all the experts lately. It’s the so-called featured snippets.

What is a featured snippet?

A featured snippet is the short answer that appears at the top of Google’s search results.

Featured snippets are usually displayed by Google as an answer to a How/What/When/Where/Who question. The engine, however, doesn’t require you to include those words in your search as it has grown into an amazing detective easily exposing every user’s intent. The answers are usually direct and let you spend even more time on the engine without the need to click through the results.

If you’ve googled a question before, then you’ve definitely stumbled upon a featured snippet. They come in different formats: lists, paragraphs, tables, videos, etc. Lists are presented bulleted, or numbered and usually provide the steps for a process, lists of items, etc. Paragraphs are the most common type of a snippet and show an excerpt of the page which is between 40-50 words. Videos often appear on searches for popular music and feature a Youtube video player. Tables are more common for searches for comparisons.

Google has even started displaying the text snippet with a photo from a different source lately. Which by itself is a sign that the snippets are here to stay.

Speculating about featured snippet’s nature might be entertaining but in order to actually achieve results, we need to take a look at some interesting statistics about the mysterious phenomenon.

First of all, even though expected, the astonishing growth of the featured snippets still managed to surprise us. Let’s take a look at the percentage of search queries that trigger Featured Snippets Dec 2015-May 2017, collected by Rank Ranger. 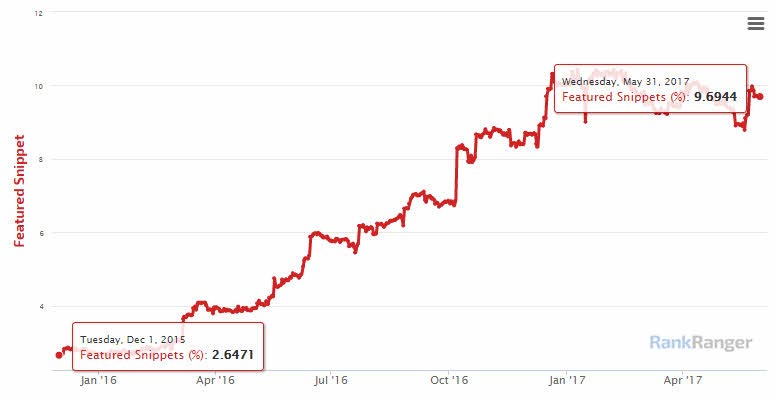 We witnessed a 300% growth in the results that generated featured snippets just in the past year and a half. This means that most of the questions one might ask could be answered within Google itself and it’s working hard to achieve it.

Now that we’re aware of the importance of these snippets, the obvious question coming to mind is what are the topics that get the most attention. 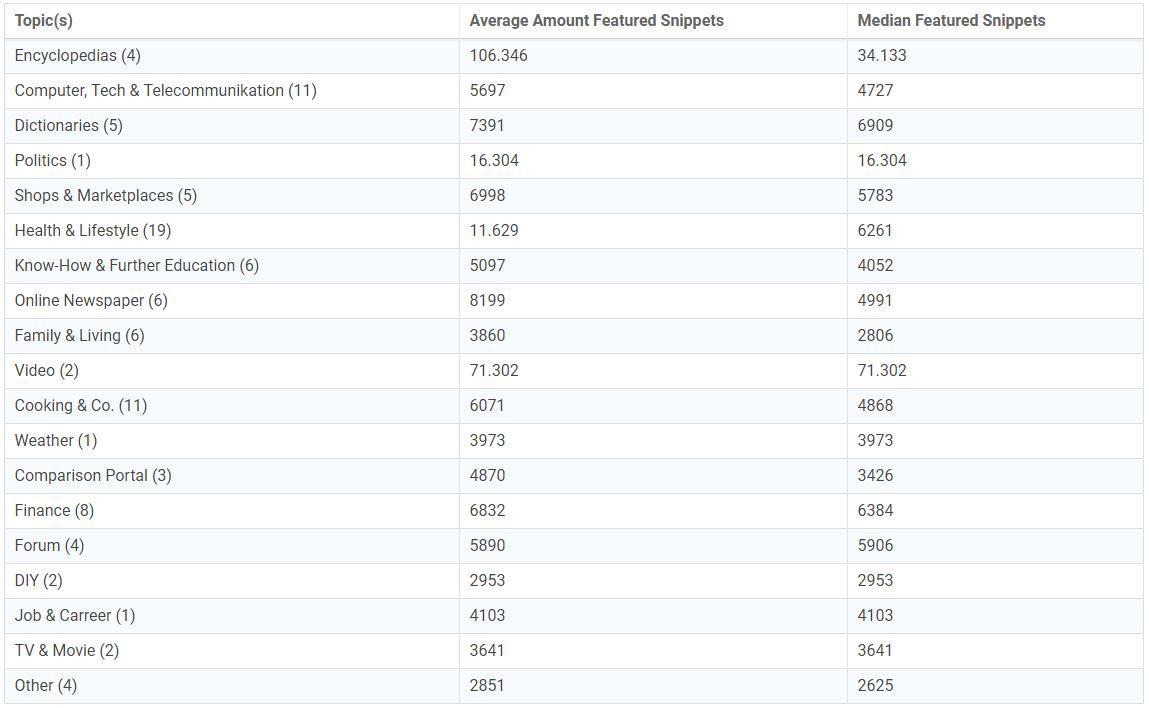 It comes as no surprise that the encyclopedias have a leading portion of the total featured snippets. As most of the searches are asking for a common knowledge, wikipedia.com is the domain with the most snippets.

As RankRager claimed based on their data the organic ranks are as it follows:

How to rank for a featured snippet?

I hope the results shown above aren’t too discouraging to you. Sure, getting to the top 10 results is an achievement by itself but having a featured snippet is a special type of honor. That’s why I’ve prepared 5 steps for you to follow on your page in order to succeed.

Before undertaking any new blog post, article, or generally a page, it’s essential to take your time for research. Keep in mind that it’s better to look for questions which can be answered shortly and are not a general knowledge. That’s because Google provides a special Knowledge Graph to questions like “How far is the moon” without citing the actual source.

Choosing a keyword can be rough and the best option is to use a tool. The one that we’re using for our own research is SEMrush. You can also use Google itself to find some popular searches.

A mistake a lot of people make is to pick a question for their focus keyword and babble for paragraphs before answering it. Unless we’re talking about the Academy Awards, building tension is usually annoying. That’s why when aiming for a featured snippet, you need to be clear and on-point. Give your answer right away and Google will definitely like that neat content of yours.

Writing a text for a featured snippet shouldn’t be an end in itself. The text is still aimed to your readers, so give your best when writing it. Surrounding your snippet paragraph with a rich quality content is important for establishing you as a trustworthy source. Make sure to give additional information for your visitors, teach them something and entertain them and they’ll love spending their time with you.

As we said, there are generally four different formats that get snipped. If you’re writing, then you’re left with three of them: paragraphs, lists, or tables. If you’re answering a question, write your answer in a separate defined paragraph. If you’re making a list or giving the steps for something, put your information in bullets or numbers. And if you’re comparing and organizing your content, put it in a table.

As you can see yourself, many snippets generate an image from the page as well. Google believes in the power of content, and they provide a full experience for their users. That’s why adding some attractive images to your posts helps to boost their keyword relevancy and attracts Google’s attention to consider your for a featured snippet.

What does the future hold for this wondrous invention of Google’s? As far as predictions can go, we can assure you that the featured snippet is here to stay. There are some tendencies worth mentioning:

We could keep speculating but what is sure is that quality content will stay the leading factor for your SEO performance.

What do you predict about the future of featured snippets? Let us know in the comments!